Death Railway is one of Thailand’s most popular attractions, and no wonder.

The history of the railway is long and tragic, and in addition to an interesting past, visitors are fascinated by its scenic location along the River Kwai.

Take a look at the history of the railroad and see where it got its scary nickname.

History of the railway of death 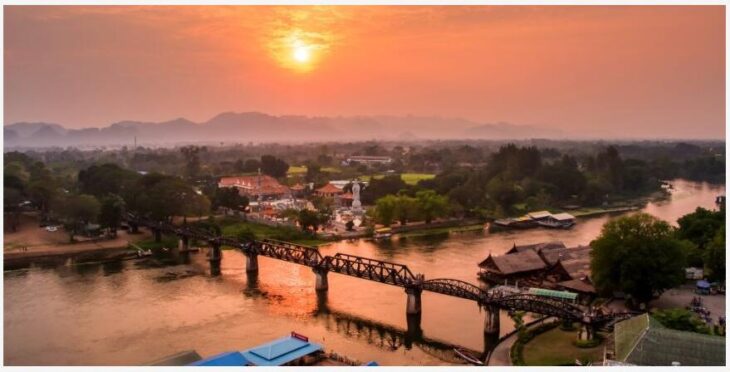 During World War II, it was considered necessary to build a railway that would form a direct route from Bangkok, Thailand, to Rangoon, the capital of Myanmar, or Burma, more than 400 kilometers away.

How the railway got its name

More than 60,000 prisoners of war and more than 200,000 Asian workers and forced laborers participated in the construction of the railway. The builders were forced to scrape under harsh conditions: in addition to swarms of mosquitoes, they were plagued by jungle heat and heavy monsoon rains, and many suffered from disease and malnutrition. Prisoners and forced laborers were also tortured.

In slave-like conditions, more than 100,000 railway builders lost their lives, and as a result, it began to be called the Death Railway.

Many sections of the track ran in very challenging terrain, and work to build the track was often done around the clock. One of the toughest sections for builders was the Hellfire Pass. Workers called the rock canyon “Hellfire Gorge” because the site was lit with torches so there was no need to interrupt the contract for the night.

The famous Kwai River also proved to be an awkward obstacle. A bridge had to be built for the railway that would cross the river near the city of Kanchanaburi.

The railway bridge was completed in 1943, but it was not considered durable enough, so it was decided to build a new bridge upstream. The new bridge was later destroyed by bombing, but it was rebuilt after the war. The film Kwai River Bridge is based on these events.

Learn about the history on site

The area surrounding Kanchanabur is today one of Thailand’s most significant tourist attractions, opening a window into the interesting history of Death Railway.

At the War Museum in Kanchanaburi and the Prisoner of War Cemetery, you can learn more about the history of the war, the Kwai River and the railway. You can also visit Hellfire Pass and the Kwai River Bridge and ride the historic train carriage a short distance along the Death Railroad.

The Kwai River also offers great nature experiences. For example, you can go on a boat trip on a traditional long-tail boat and stay in a river hotel or flot resting on the water. At the fleet, you can relax and enjoy nature and stunning scenery, as well as a wide range of activities for those looking for activities. There are several restaurants and hotels on and around the River Kwai that exude history and are a great place to rest while touring.