Andalusia is not just a popular seaside resort. The southernmost region of Spain can look back on a long and eventful history. The remains of the Moorish rule and also the influences of Christian Spain can be found here. In addition to interesting buildings, Andalusia also offers impressive natural landscapes, excellent cuisine and funny festivals.

It is not far from the capital Seville to Portugal and Morocco can be reached by ferry across the Strait of Gibraltar. In Andalusia, people speak Andalusian, a Spanish dialect that can be difficult to understand even for Spaniards.

In the following we present you the most exciting tours, the most beautiful attractions and the best sights in Andalusia.

Cordoba is worth visiting for many reasons. One of them is the Mezquita Cathedral. In German this name means “mosque cathedral”, which indicates the origin of this building. Because it used to be the main mosque of the Moorish Empire in Andalusia. Construction of the mosque began in 784. During the Reconquista, the city was conquered by the Christian armies and the mosque was consecrated as a Christian church in 1236. The church has been a UNESCO World Heritage Site since 1984.

The Mezquita Cathedral is one of the sights of Cordoba not only for its history, but also for its architecture. 856 columns made of marble, jasper and onyx support superimposed horseshoe arches. The building was expanded several times. The domes of a mosque can still be found next to the high altar of a church. Muslim and Christian architecture merge here into a unique house of prayer. To this day it is one of the largest sacred buildings in the world and one of the largest converted mosques. The building is 179 meters long and 134 meters wide, divided into 19 naves and 36 bays. The organ comes from the famous organ builder José Martínes Colmenero and was added to the building in 1702.

The Alhambra is also a Moorish building. The Alhambra is a former fortress on the Sabikah Hill in Granada. Today the Alhambra is home to the best preserved evidence of the Moorish style of Islamic architecture and art. The name probably means “the red”, which indicates the color of the stone of the fortress.

The Alhambra was built in the 11th century to defend the city. The citadel was to follow later. The sights of the Alhambra include the Myrtle Court, a pool of water that is surrounded by a myrtle hedge, the Lion Court with the lion fountain, the women’s apartments and the various water features. The remains of ornate Moorish architecture can be found throughout the Alhambra.

Alcázar is the royal palace of Seville with almost a thousand years of history. It is one of the oldest royal palaces in the world that is still in use today. If the Spanish royal family doesn’t reside here, you can also book tours of the royal chambers.

The palace was built in the 11th century by Abd-ar-Rahman III. and consists of numerous splendid stucco work, gardens and water basins. After the Christian conquest of Andalusia, the palace continued to be used, maintained and expanded. The period of the Renaissance and that of the Bourbon rulers in the 19th century in particular resulted in various renovations and alterations.

The stalactite caves of Nerja are one of the most important sights in Andalusia and should not be missed when visiting the province of Malaga. The Cueva de Nerja was discovered by chance in 1995 and is located about 1 kilometer from the coast. The five kilometer long galleries are covered with fascinating stalactite formations. The high columns and ceilings gave the cave the name “prehistoric cathedral”.

Not only does the cave offer a geological spectacle, it is also a historical monument. Paintings, bones and tools dating back to 30,000 BC were found in the various halls. Go back BC. Testimonies of early humans are also exhibited in the cave. In addition, the Cueva de Nerja has the largest column in the world at 45 meters high.

The Coto de Doñana National Park is the most important wetland area in all of Spain and proves that Andalusia does not only consist of sandy beaches and dry mountain landscapes. The national park is regularly flooded and offers a variety of animals and plants refuge.

Thousands of migratory birds overwinter here every year and some rare bird species have also found a home here. The endangered Iberian lynx also lives in the Coto de Doñana. The national park station is located near El Rocío. From here you can go on boat tours and hikes.

Sierra Nevada National Park is home to Spain’s highest peaks on the mainland. Fifteen of the national park’s peaks are over 3000 meters high. In the warm months it is particularly suitable for hiking and mountain biking. In winter there are excellent conditions for winter sports.

The National Park is a real natural beauty and is rightly one of the most popular sights in Andalusia. Numerous mineral springs arise from the ground and rocks and flow through a varied landscape of open plains and dense forests.

In February, the city of Cadiz is turned upside down for eleven days. The Cadiz Carnival is the largest and funniest in Spain. The whole city celebrates when music is played and street parties are held for 1.5 weeks. Cadiz and the Festival is famous for its extraordinary sense of humor.

In many performances, the politics of the day of the past year are joked about. If the Carnival of Cadiz is one of the sights of your trip to Andalusia, then you should definitely have your own colorful costume ready. We are of the opinion: If it is then right!

Those with a head for heights are welcome to take a detour to the pretty town of Ronda. The small town is located in the mountainous landscape of Andalusia, more precisely on a sloping rock plateau. The old and new parts of the city are separated from each other by a deep ditch through which the Guadalevín River flows. And the Puente Nuevo, the new bridge, leads across the gorge.

The main attraction of the city can be seen from afar. From the bridge, built in the late 18th century, you can look down 120 meters. The handsome structure consists of four archways and was built from the stones of the area. The Puente Nuevo is an ideal photo opportunity.

The Torre Tavira is a watchtower built in the 18th century, from whose viewing platform the whole city can be observed. The top of the tower is 45 meters above sea level, making it the highest point in the city. The tower also offers a great view of the Atlantic and is a good example of Andalusian architecture from the 18th century.

The Cathedral of Cádiz is also one of the most important sights of the city, located directly on the Plaza de la Catedral and by the sea. The cathedral was completed in 1838 and it took 116 years to build. During this time, various architects and builders worked on it, which is why different styles can be identified on it.

Similar to the Alhambra, the interesting city of Malaga also has its own castle. The Castillo de Gibralfaro is located directly on Malaga’s local mountain and thus towers over the city and the port. If you don’t want to do the ascent on foot, especially on hot summer days, you can also take the public bus (line 35) directly to the top. In addition, carriage rides are also offered for the ascent and descent, but make sure to pay attention to the condition of the horses and, if in doubt, do without.

The outer walls of Gibralfaro Castle consist of alternating layers of brick and natural stone. Regular exhibitions take place in the old powder tower of the fortress, where old swords, armor and other exhibits can be admired. Incidentally, the view from Gibralfaro to Malaga is very impressive, even the bullring can be admired from here. A little below, the Alcazaba, the old Moorish palace, is worth a visit. Combination tickets are available! 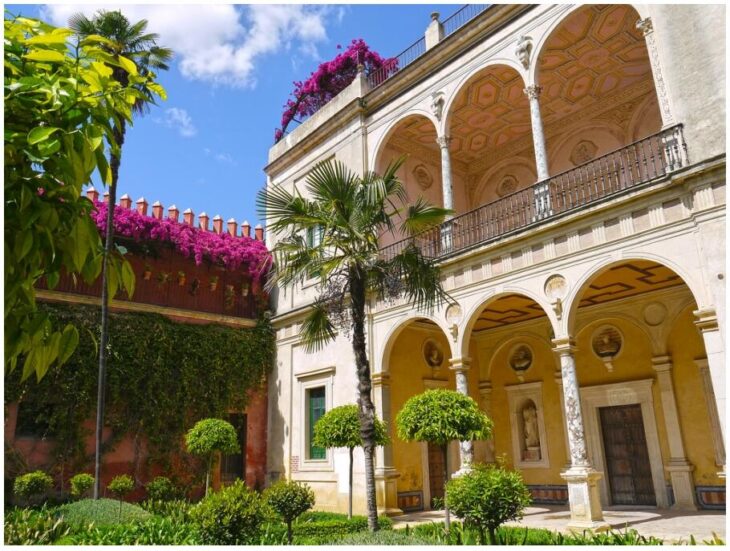